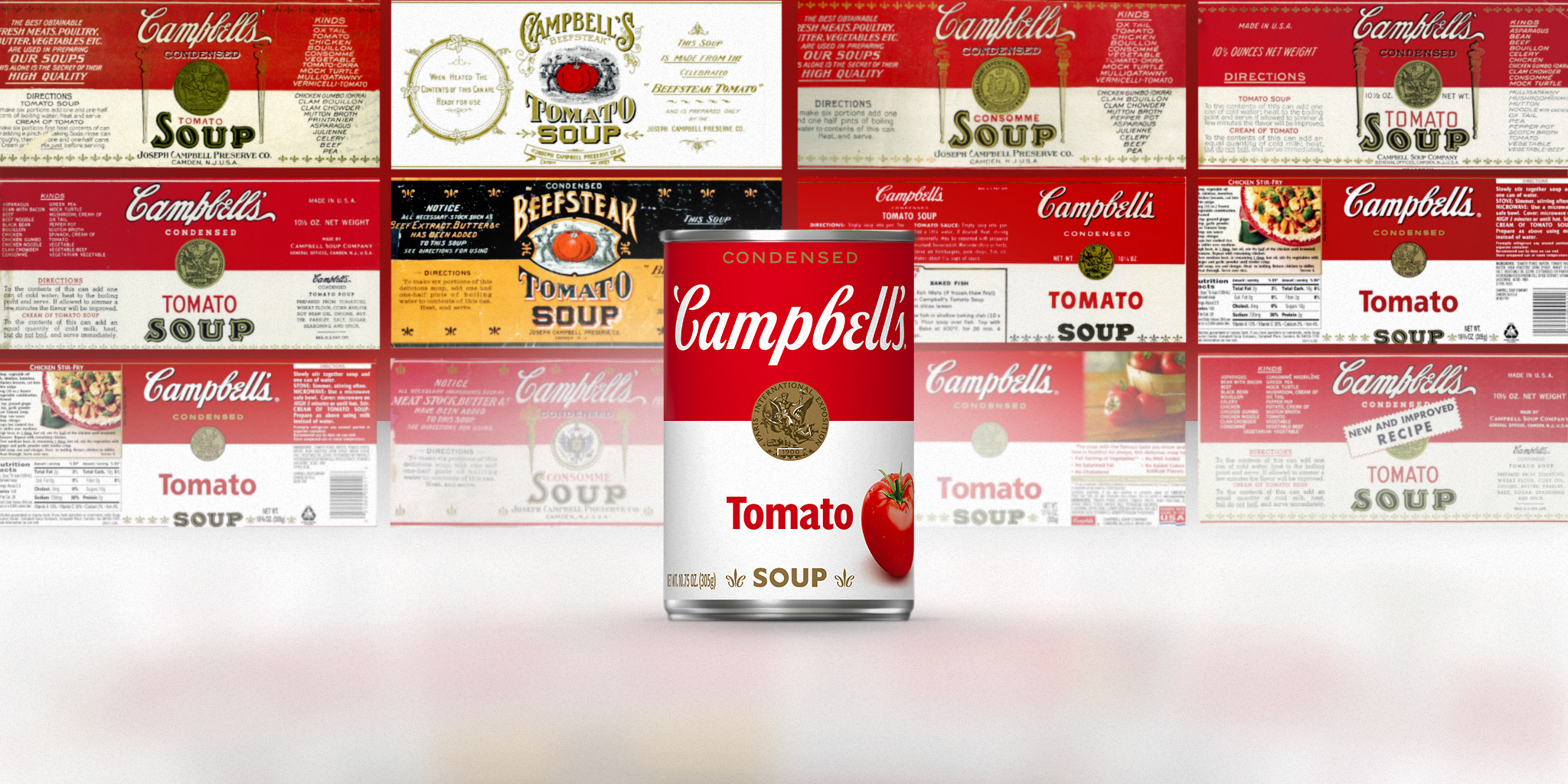 Our iconic red and white cans have been on shelves for more than 120 years—but you may have noticed that things are looking a little different in the soup aisle these days.

This past summer, we released a new look for Campbell’s Condensed Soup—contemporizing the beloved brand for the 21st century. The new logo, packaging, and visual identity leans heavily into the brand’s existing distinctive look, while also creating a new modern feel to help attract and retain new generations. It’s the same Campbell’s you love, like you’ve never seen before!

And it isn’t just a new look—with the brand relaunch came new products, new recipes, new marketing, and even some new music!

The team set out to reframe Campbell’s to connect with millennial consumers as a ready-to-create meal starter—to offer meal solutions for young families looking for easy and exciting answers to “what’s for dinner?”

Photos of ingredients were added to the new labels to reinforce our taste and quality and inspire shoppers to see how Campbell’s Condensed Soup can be used to make delicious meals.

“It’s not ‘just soup’ at the back of the pantry. Condensed soup is today’s meal-starter hack that can answer your dinner dilemma when looking for cooking inspiration.”

Check out these meals made with campbell’s condensed soup

Our Research & Development team played a significant part in the new Campbell’s by reformulating the recipes of most of our soup varieties. They simplified our ingredient statements by removing more than 250 words to make our labels cleaner and easier to read.

The introduction of our unsalted varieties, which have 60mg of sodium per serving, expanded options for our sodium-conscious consumers.

To celebrate the launch, the brand auctioned off their first-ever non-fungible token (NFT), with all proceeds benefitting Feeding America.

Feeding America is one of our long-standing partners in fighting food insecurity, and the auction helped to provide 165,000 meals to those in need.

What sounds good tonight? The Campbell’s team recently launched specially marked labels on the new cans that unlock music and recipe inspiration for your next meal.

The new label was created to contemporize, inspire and simplify our soup. It features:

“We were challenged with coming up with a design that elevates and modernizes the iconic brand–something that could bring us forward and connect us with younger generations while also honoring our rich history.”

The history of our Campbell’s soup labels

Soup history here at Campbell dates back to 1895, when we introduced our first flavor, a ready-to-serve Beefsteak Tomato soup. Just two years later, in 1897, Dr. John T. Dorrance invented the process of condensing soup, leading to smaller packaging and lower prices. His invention created Campbell’s iconic product and made soup more affordable for families while preserving the quality of the ingredients.

Over the years, we’ve introduced dozens of flavors and redesigned the can label many times. This recent overhaul is its first major redesign in 50 years—but a few elements of the new label may look familiar to you!

The first labels featured fleur-de-lis symbols. The thinking? To show people that while we were an American product, we used the highest quality French cooking methods to prepare our soups.

1898: From orange and black to red and white

The first condensed soup can label in 1897 was orange and black.

Just a year later, a Campbell company executive attended the annual Cornell-Penn football game and was impressed by Cornell’s new red and white uniforms. Inspired, we debuted the red and white soup can label shortly after.

The Campbell’s name was added to the top in a script that was based off the signature of our founder and former president, Joseph Campbell.

It’s still on our cans today, but where exactly did that bronze medallion come from?

In 1899, Campbell’s received an invitation to compete at the 1900 Paris International Exposition, a massive world fair that celebrated the achievements and innovations of the past century—including a soup competition!

While many of our competitors brought chefs to prepare their soup, Campbell’s representatives brought our canned soup in their luggage, preparing the soup themselves. Our soup won top prize, a bronze medallion, against international competitors—and the medallion has remained a key feature of our red and white labels ever since.

The new cans can be found in stores now. Find a store to buy today.