CAMDEN, N.J., June 5, 2013 ― Campbell Soup Company (NYSE:CPB) advanced its efforts to revitalize the City of Camden’s Gateway District with the demolition of the long-abandoned Sears building at 1300 Admiral Wilson Boulevard. The demolition is scheduled to take approximately eight weeks.

Campbell purchased the vacant building for $3.5 million in June 2012 as part of its efforts to develop an office park in the Camden Gateway District which will help attract additional development in the city. Campbell, the State of New Jersey, the County and City of Camden announced plans to develop the area adjacent to the company’s world headquarters in February 2007, with Campbell designated as the master redeveloper of the Gateway Office Park project. Campbell has invested more than $132 million in expanding its headquarters, including the June 2010 opening of an 80,000-square-foot Employee Center and renovations to existing buildings on its campus. As part of that effort, Campbell has invested more than $10 million in acquiring several properties, preparing them for redevelopment and inclusion in the proposed office park. 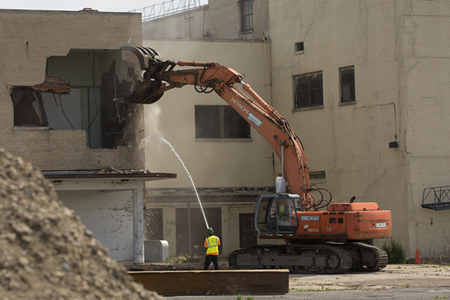 “Today marks an important step in our plans to revitalize the Gateway District and the City of Camden,” said Richard Landers, Campbell’s Vice President of Tax and Real Estate. “We have always believed that the former Sears parcel is critical to having a viable footprint for the office park project.  We are pleased to be moving forward with our development plans.”

Campbell has retained Cooper, Robertson & Partners, an architecture and urban design firm, to develop plans for the Gateway Office Park. Campbell is also actively marketing the project to real estate developers and corporate real estate professionals in the region.

“This is great news for the City, Campbell and the region,” said Mayor Dana L. Redd, City of Camden.  “The demolition of this property finally clears the way for future development in the Gateway Neighborhood. My Administration looks forward to continued collaboration with Campbell as we strive to spur economic development and move Camden forward.”

Located in Camden since it’s founding in 1869, Campbell is the longest-standing corporate tenant and the only Fortune 500 Company headquartered in the city.

In addition to its role as developer of the Gateway Office Park, Campbell is an active participant in revitalizing Camden and helping improve the lives of city residents. Through its Healthy Communities Program, Campbell continues to lead a city-wide effort to reduce hunger and childhood obesity among Camden’s 23,000 school-aged children. Additionally, the Campbell Soup Foundation is dedicated to supporting organizations that inspire positive change, funding more than $1 million in grants annually to a variety of organizations that focus on community wellbeing, youth empowerment and economic sustainability programming.

Campbell Soup Company is a manufacturer and marketer of high-quality foods and simple meals, including soup and sauces, baked snacks and healthy beverages. Founded in 1869, the company has a portfolio of market-leading brands, including “Campbell’s,” “Pepperidge Farm,” “Arnott’s,” “V8” and “Bolthouse Farms.” Through its corporate social responsibility program, the company strives to make a positive impact in the workplace, in the marketplace and in the communities in which it operates. Campbell is a member of the Standard & Poor’s 500 and the Dow Jones Sustainability Indexes. For more information, visit www.campbellsoupcompany.com and https://twitter.com/CampbellSoupCo.